Don’t Settle for Survival – Change and Thrive: How a Senior Living Community Shifted Their Strategy to Become Industry Leaders. 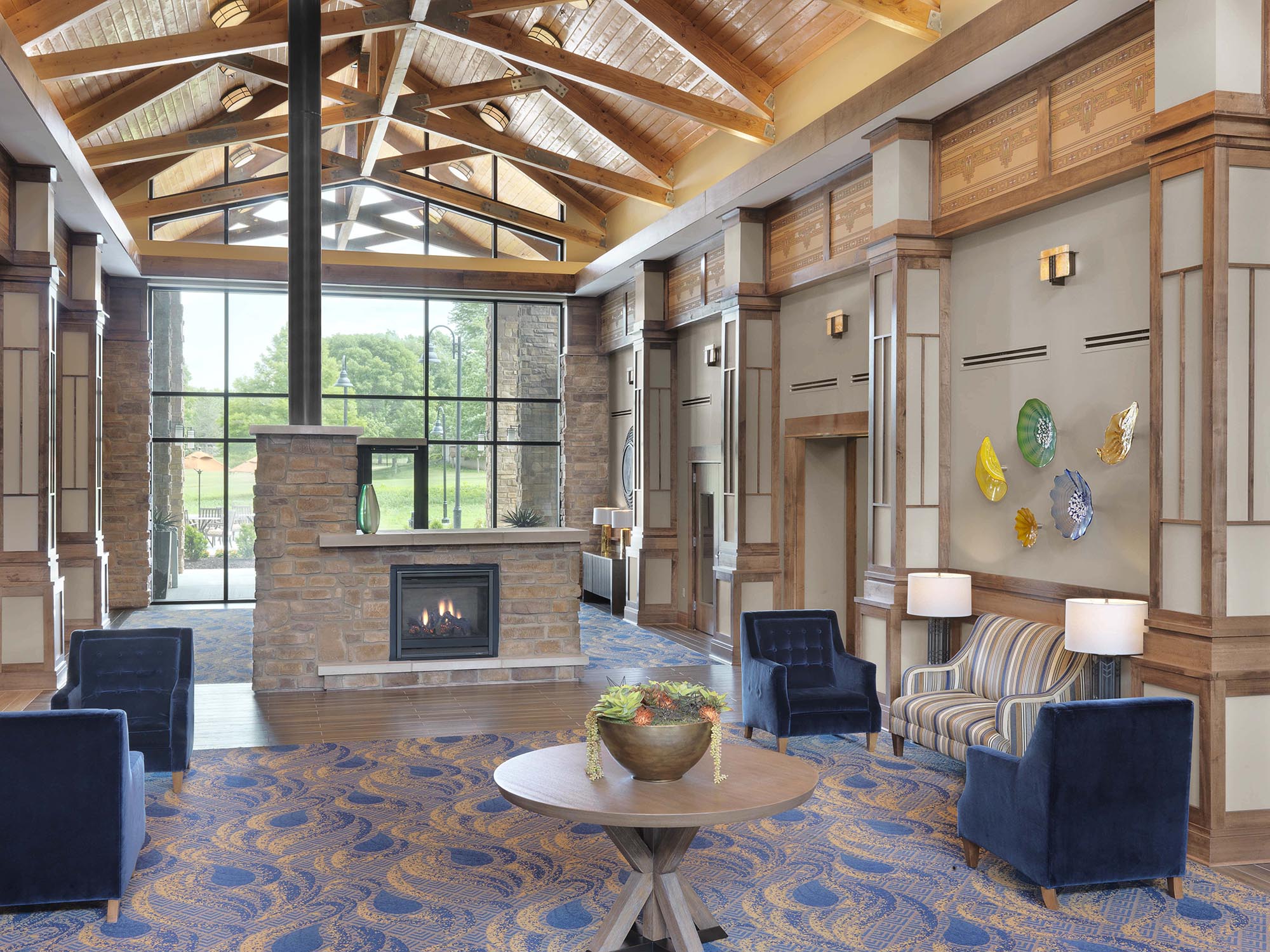 If ever there were a case study for the adage surviving not thriving, it’s the story of John Knox Village (JKV), a Life Plan Community in Lee’s Summit, Missouri. Maria Timberlake, Vice President of Senior Living, described the community’s 50 years of ongoing challenges and transformations during an interactive session at the 2019 Inspire the Future  - By Design conference hosted by SFCS Architects in Roanoke, Virginia.

Founded in 1970, the mixed-use senior living community was considered visionary. The original JKV campus featured a 300-bed nursing home, small independent living cottages and apartments and assisted living apartments. Over the next decade the community grew quickly by adding additional apartments, a motel, restaurants, and retail and service businesses that generated revenue and blurred the lines between the surrounding community and its campus. A bowling alley, swimming pools, and a state-of the-art (at the time) 3,000-seat pavilion building in the center of campus drew the public in for recreation, athletic, and cultural events.

Five years after opening as a nursing home and Assisted Living facility, Timberlake said, “The leaders at the time claimed they set out to “revolutionize” the pre-retirement years with Sun Valley.” The new on-campus neighborhood of 170 small, ranch-style independent living homes were developed to look similar to typical homes in neighboring Kansas City.

In time, the focus shifted to the booming business of health services. The new 430-bed care center was opened in 1988. SFCS President, Tim Mueller said “The star plan design which was considered efficient – the penultimate for skilled nursing at the time.” Timberlake said, “We were busting at the seams, Medicare was flowing, and the margins were great out of the care center.” Eventually, there were more life care residents than beds, so they were forced to turn to an expensive solution – housing the overflow of people off campus in neighboring nursing homes.

Then Medicare funding started to slow. The pre-retirement independent living homes in Sun Valley were in need of renovation and falling out of favor. The existing ranch-style homes were no longer practical with their single car garages, entry stairs, choppy floor plans, and galley kitchens.

In addition, “People didn’t want to pay entry fees for studio apartments, and we literally had hundreds of studios,” Timberlake said. With entry fee sales dwindling, the Village’s revenue model began to shift more and more to renting the smaller, outdated units to maintain the revenue flow.

In 1991, John Knox Village leaders launched a long-range strategic plan, Vision 2020. Incremental renovations began on apartments, cottages and freestanding homes, including some tear downs and rebuilds. But even with the improvements, the campus overall still needed updating and wasn’t fully meeting market needs.

Campus amenities also were becoming out of date. For example, John Knox Village was at one time proud to offer both an indoor and outdoor pool, but competitors were outpacing them, building new aquatic centers and modernizing common areas. “We just didn’t have what people wanted.”

In the mid-2000s, a new Independent Living development with 122 apartments and 32 cottages surrounding a lake was planned for vacant property on the west side of the campus. “We were moving full speed ahead until the economy tanked in 2008,” said Timberlake.

“Customers’ portfolios and our product were declining,” Timberlake admitted, and without the influx of entry fee charges, their financial picture changed. They had to put the development plans on hold.

Facing a poor economy, declining sales, an aging facility, and a changing revenue model, the executive team hunkered down to take honest inventory of how their products and services met market demands. Timberlake said they dug into the data and asked the hard questions, “Are we living up to our reputation as being a leader in Kansas City? Are we being the best version of ourselves that we can be?”

John Knox Village hired SFCS, Greystone (development consultant), and Paric Corporation (builder/contractor) to help understand the gaps and develop a new approach. They needed a master plan that included building, renovation, and site design. Just as importantly, they needed a strong business plan. The team realized they needed to create “wow features” that allowed for resident experiences. Community culture was their main focus. Quality was important, as was the need to enhance the continuum of care in order to stay compliant and meet market demands. Everything needed updating. They needed a lot, but had to prioritize.

With the help of the experts at Greystone, the team generated ideas and initiatives, then tested them financially to be sure they generated sufficient revenue. They discovered an untapped higher-end market of people who were aware of John Knox, but didn’t want to live there. The goal of the process was to help prioritize needs and determine where to begin. Stuart Jackson, First Vice President at Greystone said, “We helped them find their start button.”

Once new priorities and direction were set, SFCS began re-designing the site and buildings. Blighted buildings were torn down and replaced with 52 new units along the property’s East edge. “This served to announce to the community that John Knox is open for business and doing new things,” Mueller said. Amenities were centralized and buildings were designed to connect with the outdoors. A street was closed off to help take advantage of the existing park, lake, and golf course as the heart of the campus. A state-of-the-art wellness center featuring an aquatics center with a saltwater pool serves today’s more active and health-conscious seniors. A comfortable movie and learning theater, a salon, new dining spaces, and a pub all met the residents needs for socializing.

To control construction costs, volume was the name of their game. Recognizing that windows add to square footage costs (ie to build), they made the decision to include lots of natural light anyway, in order to create a sense of larger space. “It’s worth anything lost in value engineering,” said Timberlake. And to be sure not to trap themselves in a rut, SFCS designed the new Independent Living building so that by just removing a wall, two smaller one-bedroom units could be flexed to one larger two-bedroom unit.Having learned from experience, Mueller said, “Flexibility is the key to meet changing market demands.”

The future is looking good for John Knox VIllage. Conceptual plans for new lakeside villas, improvements to the healthcare building, and a complete redesign of Sun Valley are all in the works. The 170 outdated ranch houses would be replaced in phases with smaller neighborhoods each with ten cottages facing a common green. The smart cottages are designed with technology and accessibility features to allow IL residents to age in place.

Staying true to John Knox Village’s reputation of being an industry leader, their strategic vision includes not just redesigning physical spaces, but also planning a purposeful community-oriented culture with service excellence and “wow experiences” for residents. During all of the construction and changes, Timberlake said, “We were in constant communication about this repositioning with our existing residents, allowing them to feel excited and included, rather than feeling like they were being cast aside.”

Timberlake shared that the latest strategic shift has been challenging.

“This was the biggest learning experience of my professional career.” She reiterated the importance of clear communication and nurturing relationships with all of the stakeholders. “Assume that things are going to go wrong. That’s where you draw on your team’s expertise.”

John Knox Village is in strong fiscal shape, with short and long-term strategic plans for building and renovation, as they reshape and grow the community. They have a healthy balance of revenue streams with a strong focus on serving the Independent Living market. Even in their recent success, they are positioned well for the future.

“If they’ve learned anything in the last 50 years it’s this,” Tim Mueller said. “You’ve got to always keep moving forward to be successful.”