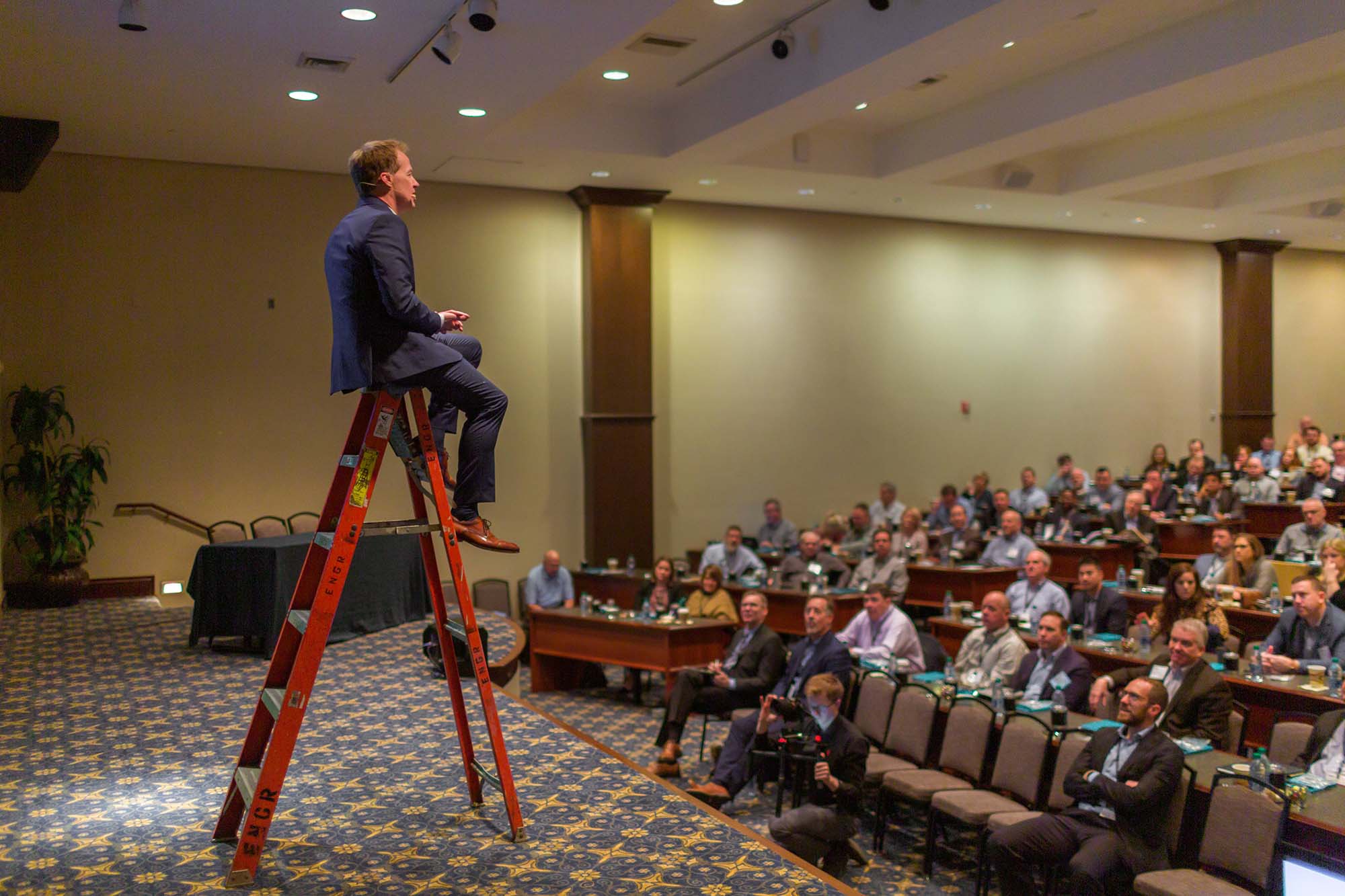 SFCS Architects’ 2020 By Design Conference was a three-day event that took place in Roanoke, VA. To celebrate the event’s 35th year, SFCS chose one of its most inspirational keynote speakers yet. Kenyon Salo, a professional skydiver and born adventurer from Boulder, Colorado, made his entrance much like he does with his day job – by flying in swiftly and with an abundance of enthusiasm. The next hour would challenge them to move out of their comfort zones, beckoning the experience necessary to think big and dream even bigger.

Salo opened with a question: What if the very next experience you had, could change your life – or someone else’s life – forever? Salo began with a story about one of his favorite experiences, the first time he jumped from a “perfectly good” plane to skydive into the Denver Broncos Stadium.  As Salo descended, the PA announcer was frantically communicating with the sky team to find his last name.  It had been left off the list of names by mistake. All they had was Kenyon’s first name.

“I’m making my dive down to the field, and the crowd is getting louder,” said Salo. “Just as I reach the 10-yard line I hear my first ever stadium introduction, ‘And our final jumper, Ken Yonnn!’”

The SFCS By Design audience let out an audible laugh. Salo then introduced the idea of intentionally creating memorable and meaningful experiences. He noted the theme behind this year’s conference: “Think Big, Dream Bigger”. The audience shared the excuses for avoiding experiences. Fear, time, money, and work obligations were among the answers. So, how do we overcome those obstacles and begin saying “yes”?

Kenyon’s answer started with the presentation of an eight-foot ladder, opened and standing tall center stage. He positioned himself at the first step, equating it to establishing a goal and the second step as planning. The third step is action and that’s where the feeling becomes real. The forces of the environment are more in play at this height, but the goal hasn’t been met yet. He ascended to the fourth step. It’s when people start to see signs, feel resistance, and pause with hesitation. The warning label on the ladder read, “Please do not stand above this step.” However, expressing confidence in his skills and preparation, Salo ascended past the step and stood on top of the ladder, overlooking the room, reaching his destination and his goal.

“I also signed a lengthy insurance document,” he quipped.

The audience seemed to appreciate the analogy, but Salo wasn’t done illustrating the concept of rising above comfort zones. He turned to audience participation, asking attendees to walk around and break the ice with someone new. They were to say “hello” in their best British accents, find three things in common with each other, and, finally, sit together in new seats. During the time of mingling, participants were smiling sheepishly while conversing with their new acquaintances. As Salo worked to reel the audience’s attention back in, he noticed people were retreating to their original seats – back to their comfort zones. He asked participants to go back and sit with the person they had just met. Their new topic of conversation was bucket list items.

“Your bucket list items are the ultimate experience,” he said. “You see, experiences make you feel alive and they make you want to pass something on or talk about it. As a company, as designers, as architects – your aim is to create experiences people want to share.”

Salo pointed out the importance of the spaces designed and operated by those in the audience. He noted how powerful sitting areas and community halls could be because they are places where these amazing stories – and experiences – are shared.

“I love this energy!” he exclaimed. “You’re sharing stories and that means you’re exchanging energy.”

Energy, Salo explained, is not something that ends when life begins in a retirement community. As much as residents love to reminisce on the past, they have energy that remains to be used. They want to continue experiencing. Our job as designers, administrators, and architects is to listen, be open, and let those stories shape the way we create. Salo reviewed the results of a SFCS survey given to residents of a nursing home asking about their life experiences. When asked about the moments they were most proud of, Salo noticed all the residents’ answers were the same.

It was the times they were able to give back to others.

“It’s our instinct to focus on creating environments that help the residents,” said Salo, “but it’s clear the residents also want the opportunity to help others. Giving residents the chance to make a difference means there is a constant exchange of energy between them, their caregivers, and the community. It all leads to living a life more fulfilled.”

Tye Campbell, Principal Emeritus of SFCS, and Melissa Pritchard, SFCS Managing Principal, closed out the keynote address. Pritchard told the brief story about meeting a resident who was directly impacted by SFCS’s work. The man asked her who she was and what she was doing. Pritchard told the resident she was part of the team that designed the memory care center.

“He took both of my hands and said, ‘I want to thank you so much’,” Pritchard explained. “He said he’d been caring for his wife at home for three years even though his doctors told him it would kill him. He didn’t feel like there was a good enough place for her to live – until now. He finished by saying ‘I wanted to thank your team for what you’ve given not only my wife, but all of us’.”

It was proof in just one small story.

It’s not just the residents who are living a life more fulfilled through these experiences, but the designers, architects, engineers, and administrators who work so hard to create them.